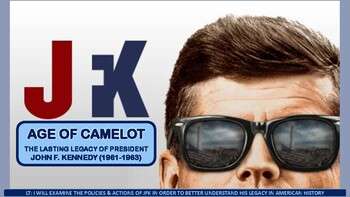 This visually stimulating presentation provides a detailed account of John F. Kennedy's legacy as President of the United States (1961-1963). It can be used by instructor as tool to facilitate class discussion (and notes), or uploaded into google classroom for independent student use. The 24 slide presentation is filled with colorful pictures, maps, and other relevant information that will breathe life into this fascinating era of U.S. history while providing a platform in which to build additional related activities. If you'd like a version you can edit, shoot me an email and I'll be happy to help!

* The 1960 presidential election & the historic role that television played.

* JFK's New Frontier agenda, his evolution on the civil rights, & the race to the moon.

* Thirteen days on the brink: thorough overview of the Cuban Missile Crisis.

* The Nuclear Test Ban Treaty and an easing of Cold War tensions after the Cuban Missile Crisis.

* Kennedy begins his reelection campaign in Dallas, Texas (November 22, 1963), the assassination of a president, and the aftermath of a national tragedy.