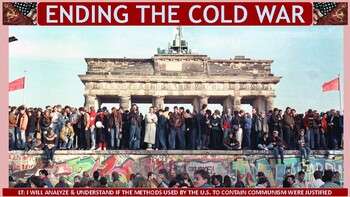 This visually stimulating presentation provides a detailed account of the End of the Cold War (1980-1991). It can be used by instructor as tool to facilitate class discussion (and notes), or uploaded into google classroom for independent student use. The 20 slide presentation is filled with colorful pictures and other relevant information that will breathe life into this fascinating era of American history while providing a platform in which to build additional related activities. If you'd like a version you can edit, shoot me an email and I'll be happy to help!

* The Reagan Doctrine applied in Central America & the Caribbean (Nicaragua,

* The Reagan administration gets involved in the Middle East (Lebanese civil war); Islamic radicals respond to U.S. presence in Lebanon with acts of terrorism.

* The emergence of Soviet leader Mikhail Gorbachev leads to change in the Soviet Union (glasnost & perestroika).

The 1980's: A Shift to the Right Under Ronald Reagan Activity for U.S. History