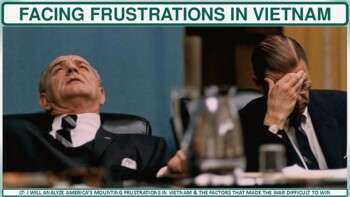 This visually stimulating presentation provides a detailed overview of the frustrations Lyndon Johnson and U.S. leaders faced in Vietnam as they chased an elusive victory (1965-1968).. It can be used by instructor as tool to facilitate class discussion (and notes), or uploaded into google classroom for independent student use. The 25 slide presentation is filled with colorful pictures, maps, and other relevant information that will breathe life into this fascinating era of history while providing a platform in which to build additional related activities. If you'd like a version you can edit, shoot me an email and I'll be happy to help!

* The use and effects of Agent Orange and other chemicals.

* Why the U.S. strategy of a limited war proved ineffective.

* How the ongoing war divided the South Vietnamese people.

* Growing opposition to the war in the U.S., the role television played in broadcasting the war at home, how the American public became divided over Vietnam, and the growing antiwar movement.

* The importance of the Tet Offensive.

* The main reasons Lyndon Johnson chose to not run for reelection in 1968.

* The many factors that made the 1968 presidential election so chaotic, and the crucial year of 1968 shaped a generation.