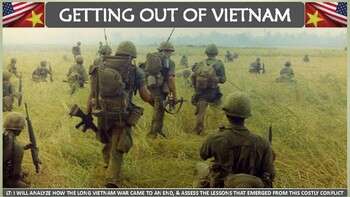 This presentation provides students a visually stimulating lesson detailing the slow U.S. withdrawal from Vietnam & the end of the long war (1969-1975). Designed as a student-centered activity to be uploaded into google classroom, the presentation includes 10 embedded focus questions for students to answer using their core text (and additional information presented in the slides). The 22 slide activity is filled with colorful pictures, maps, and other relevant information that will breathe life into this important era in modern American history. This lesson is also great to use when you are out of the classroom, serving as an awesome resource for sub days! If you'd like a version you can edit, shoot me an email and I'll be happy to help. Enjoy!

* American involvement comes to an end (Nixon declares peace is at hand; The Christmas Bombings; the Paris Peace Accords ends the U.S. war in Vietnam).

The war in Vietnam comes to an end: the fall of Saigon.

* The aftermath of the war in Southeast Asia.

* The aftermath & legacy of the war in the United States.