Home Products Politics and Society in United States in the 1970's Activity for U.S. History 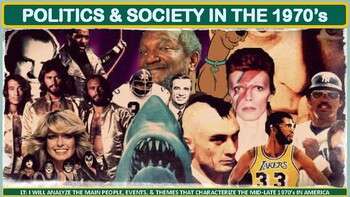 Politics and Society in United States in

This presentation provides students a visually stimulating lesson detailing politics and society in the United States in the post-Watergate 1970's. Designed as a student-centered activity to be uploaded into google classroom, the presentation includes 8 embedded focus questions for students to answer using their core text (and additional information presented in the slides). The 20 slide activity is filled with colorful pictures, maps, and other relevant information that will breathe life into this important era in modern American history. This lesson is also great to use when you are out of the classroom, serving as an awesome resource for sub days! If you'd like a version you can edit, shoot me an email and I'll be happy to help. Enjoy!

* The problems that plagued the United States during Gerald Ford's short presidency.

* Carter's helps negotiate peace in the Middle East (the Camp David Accords; Cold War tensions with the Soviet Union reemerge (Soviet invasion of Afghanistan & the U.S. boycott of the 1980 summer Olympics in Moscow).

* Women continue their fight in the struggle for gender equality in the workplace & increase their political clout in the U.S. during the 1970's.

* Technological innovation that changed how people live & work (the importance of the microprocessor, the first commercial calculator, the first video games, Apple Computers, the microwave, & the VCR).