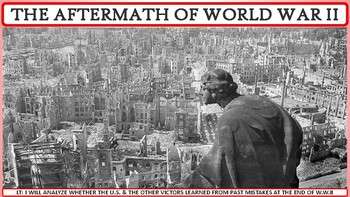 This visually stimulating presentation provides a detailed account of the main issues faced by U.S. leaders after emerging victorious in World War II. It can be used by instructor as tool to facilitate class discussion (and notes), or uploaded into google classroom for independent student use. The 15 slide presentation is filled with colorful pictures, maps, charts, and other relevant information that will breathe life into this fascinating era of history while providing a platform in which to build additional related activities. If you'd like a version you can edit, shoot me an email and I'll be happy to help!

* The U.S. shift from prewar isolationism to internationalism.

* Influence of FDR's "four essential freedoms" on the founding of the United Nations.

* The impact of FDR's GI Bill of Rights.

* The opportunities and difficulties faced by African Americans after the war.

* The opportunities and difficulties faced by American women after the war.