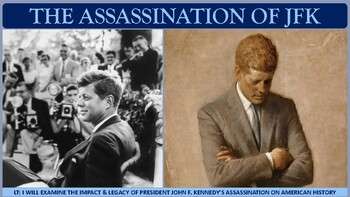 This visually stimulating presentation provides a detailed account of President John F. Kennedy's assassination (November 22, 1963) & its aftermath. It can be used by instructor as tool to facilitate class discussion (and notes), or uploaded into google classroom for independent student use. The 15 slide presentation is filled with colorful pictures that will breathe life into this fascinating & traumatic event in U.S. history while providing a platform in which to build additional related activities. If you'd like a version you can edit, shoot me an email and I'll be happy to help!

* JFK's motorcade through the streets of downtown Dallas & the 3 shots fired from the Texas School Book Depository.

* JFK passes away; LBJ sworn-in on Air Force 1, & a nation in mourning.

* A nation watches the funeral of a president.