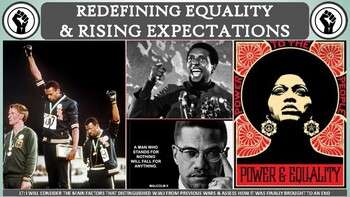 This visually stimulating presentation provides a detailed overview of the Civil Rights Era: Redefining Equality & Rising Expectations (1964-1970). It can be used by instructor as tool to facilitate class discussion (and notes), or uploaded into google classroom for independent student use. The 18 slide presentation is filled with colorful pictures, maps, notes, and other relevant information that will breathe life into the fascinating people and events that shaped the movement while providing a platform in which to build additional related activities. If you'd like a version you can edit, shoot me an email and I'll be happy to help!

* The causes & overall impact of race riots in American cities in the late 1960's.

* President Johnson's response to rising race tensions & the findings of the Kerner Commission.

* The emergence & influence of Stokely Carmichael & the rise of black power.

* The origins, emergence, & impact of the Black Panthers.

* Political gains achieved by African Americans at the polls in the late 1960's/ early 1970's.

* The growth of black pride & Afrocentrism.