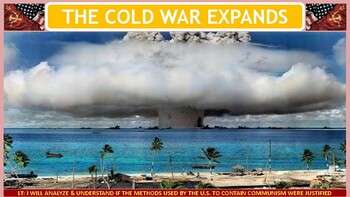 This visually stimulating presentation provides a detailed overview of how the Cold War escalated and expanded in the years following the end of World War II (1948-1960). It can be used by instructor as tool to facilitate class discussion (and notes), or uploaded into google classroom for independent student use. The 23 slide presentation is filled with colorful pictures, maps, and other relevant information that will breathe life into this fascinating era of history while providing a platform in which to build additional related activities. If you'd like a version you can edit, shoot me an email and I'll be happy to help!

* The origins and results of the Berlin Crisis and Airlift.

* The formation of NATO and the Warsaw Pact as a result of the escalating Cold War.

* How the Hungarian revolt against communist rule in 1956 tested U.S. containment.

* The origins of the Korean War and how it represented the U.S. policy of containment.

* The methods that the U.S. government used to win support from 2nd & 3rd world countries around the world as Cold War tensions increased.

* Sputnik, NASA, and the beginning of the "space race."