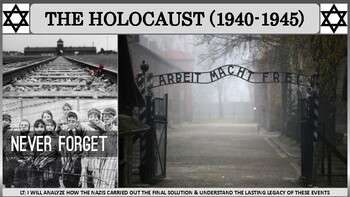 This presentation provides the grim details of the Holocaust. From the origins of the persecution of the German Jewish population through the Allied liberation of the camps, it serves as an engaging warning from history. The presentation can be used by instructor as tool to facilitate class discussion (and notes), or uploaded into google classroom for independent student use. The 16 slide presentation is filled with colorful pictures, maps, and other relevant information that will breathe life into these consequential issues while providing a platform in which to build additional related activities. If you'd like a version you can edit, shoot me an email and I'll be happy to help!

* The beginning of the persecution of German Jews (Enabling Act, Nuremberg Laws, Kristallnacht).

* Germany invades Poland and the first steps towards the final solution begin (Warsaw Ghetto and the round-up of European Jews in German occupied/ allied territories).

* The invasion of the Soviet Union (1941) changes the German approach.

* The Wannsee Conference and the organization of the final solution (including the decision to build death camps),

* The various German tactics used (dehumanization, transporting of Jews in cattle cars, the process of "selection" after arriving at the death camps, "destruction through work," the "showers," and the disposal of bodies.

* The Allied liberation of the death camps and concentration camps (including the German attempts to cover-up their crimes, "death marches," etc...).

* The legacy of the Holocaust.

Suela Hyka
Very well structured and well presented material. It is very coincise and to the point. Great for google classroom.
03-11-2020