Home Products The Origins of the Cold War PP Notes for U.S. History 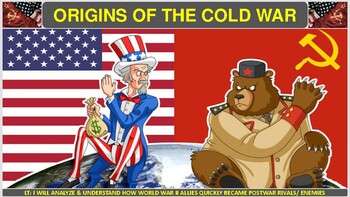 The Origins of the Cold War PP Notes for

This visually stimulating presentation provides a detailed overview of the origins and escalation of the Cold War. It can be used by instructor as tool to facilitate class discussion (and notes), or uploaded into google classroom for independent student use. The 18 slide presentation is filled with colorful pictures, maps, and other relevant information that will breathe life into this fascinating era of history while providing a platform in which to build additional related activities. If you'd like a version you can edit, shoot me an email and I'll be happy to help!

* The decisions made at the Yalta Conference, and the creation of the United Nations.

* The Potsdam Conference: new leadership, the bomb, and the beginnings of division between World War II allies.

* An analysis of conflicting postwar goals between the United States and Soviet Union.

* The U.S. develops Containment Policy in response to Soviet influence in eastern Europe.

* The importance and influence of Winston Churchill's Iron Curtain Speech.

* The impact of the Marshall Plan and the Soviet Response.

*Origins of the Cold War: A summary.