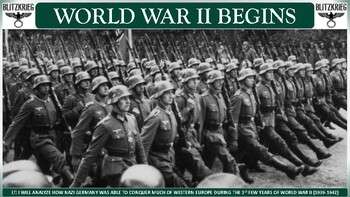 This visually stimulating presentation provides a thorough account of the first few years of the war in Europe during World War II. The German conquest of Poland and Western Europe, the Battle of Britain, the Battle of North Africa, the German invasion of the Soviet Union, and other key events are all detailed. It can be used by instructor as tool to facilitate class discussion (and notes), or uploaded into google classroom for independent student use. The 24 slide presentation is filled with colorful pictures, maps, and other relevant information that will breathe life into this fascinating era of history while providing a platform in which to build additional related activities. If you'd like a version you can edit, shoot me an email and I'll be happy to help. Enjoy!

* The German attack of Western Europe, the Miracle of Dunkirk, and the fall of France.

* The emergence of Winston Churchill, the Battle of Britain, and the London Blitz.

* The German campaign in the Balkans in preparation for Barbarossa.

* The beginning of the Siege of Leningrad.

* The German army at the gates of Moscow as winter descended across the Russian landscape.